On Tuesday 14th June 1904, what appears to be the first meeting of what would become Railway Union Sports Club was at the Gresham Hotel. It reads as follows:

On Tuesday a representative meeting of the clerical staffs of the railway companies and steampacket companies and Irish Railway Clearing House was held at the Gresham Hotel for the purpose of forming an Athletic Union. Mr. Charles Smith Secretary of the Irish Railway Clearing House presided and Mr. H.S. Coe was appointed hon. secretary to the meeting. Letters promising support to the movement were received from Mr. Francis B. Ormsby secretary G.S. and W. Railway; Mr. S. Symes, Audit Superintendent, G.S. and W Railway; Mr. J.H. Bell Superintendent do; Mr. A.C. Reid General Manager D.W. and W. Railway; Mr. R.J. Moore uperintendent G.N.R. (Ireland); Mr. Morrison Assistant Manager M.G.W.R. co; Mr. M.F. Keogh Secretary D.W. and W. co; Mr. J. Shanks Chief Accountant G.N.R. (Ireland); Mr. J.J. Alcorn Chief Accountant G.S. and W.R. It was decided on the motion of Mr. Lawlor, seconded by Mr. Smith: – “That an Athletic Union be formed comprising the clerical staffs of the railway and steampacket companies represented in Ireland, and of the Irish Railway Clearing House.” It was also decided that the organisation should be called “The Railway and Steampacket companies Irish Athletic Union.” Mr. P.J. Brennan proposed that clubs for cricket, hockey, football and other games should be formed. Mr. Doherty seconded the motion which was carried nem. con. It was decided to have an annual subscription of 10s. It was decided to appoint an Executive Committee consisting of three delegates from each company or committee party to the Union, such delegates to be elected by the respective companies, and their names sent to Mr. H.S. Coe, G.S.and W. Railway within seven days. 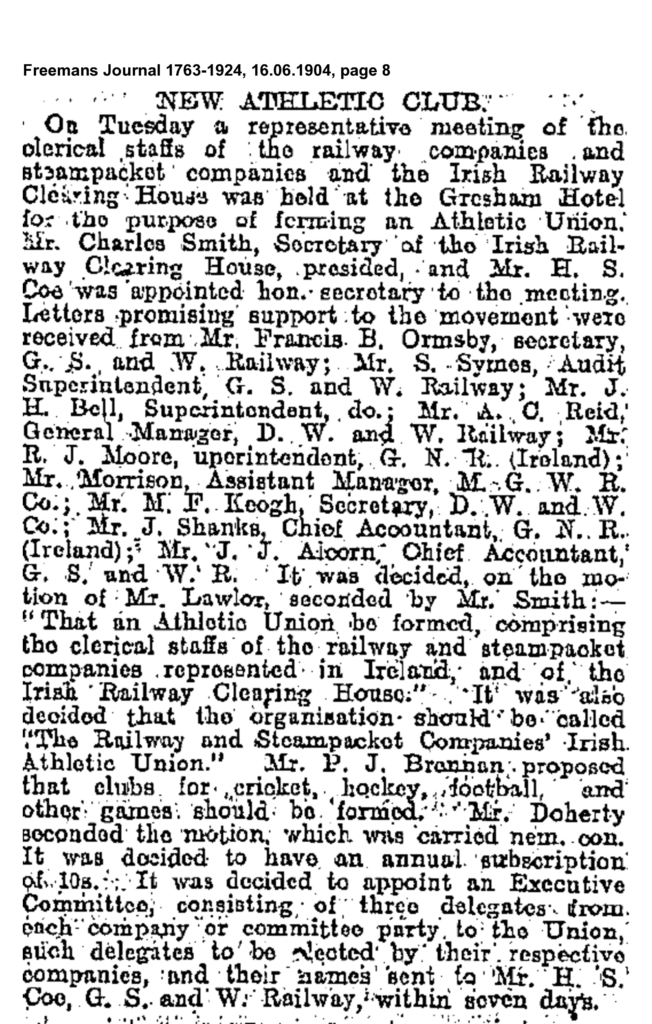 Close Menu
Park Avenue, Sandymount, Dublin 4
We use cookies on our website to give you the most relevant experience by remembering your preferences and repeat visits. By clicking “Accept All”, you consent to the use of ALL the cookies. However, you may visit "Cookie Settings" to provide a controlled consent.
Cookie SettingsAccept All
Manage consent

This website uses cookies to improve your experience while you navigate through the website. Out of these, the cookies that are categorized as necessary are stored on your browser as they are essential for the working of basic functionalities of the website. We also use third-party cookies that help us analyze and understand how you use this website. These cookies will be stored in your browser only with your consent. You also have the option to opt-out of these cookies. But opting out of some of these cookies may affect your browsing experience.
Necessary Always Enabled
Necessary cookies are absolutely essential for the website to function properly. These cookies ensure basic functionalities and security features of the website, anonymously.
Functional
Functional cookies help to perform certain functionalities like sharing the content of the website on social media platforms, collect feedbacks, and other third-party features.
Performance
Performance cookies are used to understand and analyze the key performance indexes of the website which helps in delivering a better user experience for the visitors.
Analytics
Analytical cookies are used to understand how visitors interact with the website. These cookies help provide information on metrics the number of visitors, bounce rate, traffic source, etc.
Advertisement
Advertisement cookies are used to provide visitors with relevant ads and marketing campaigns. These cookies track visitors across websites and collect information to provide customized ads.
Others
Other uncategorized cookies are those that are being analyzed and have not been classified into a category as yet.
SAVE & ACCEPT